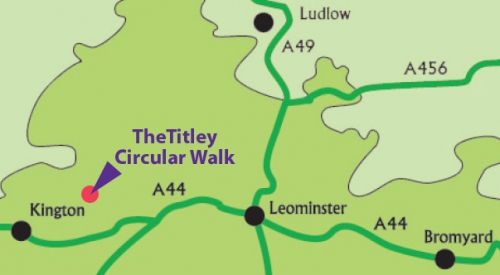 These features and the terrain are shown on the Titley circular route map.

There is parking in Titley village.

Refreshments can be obtained from the Stagg Inn in Titley. Please check opening times and booking requirements before setting out. 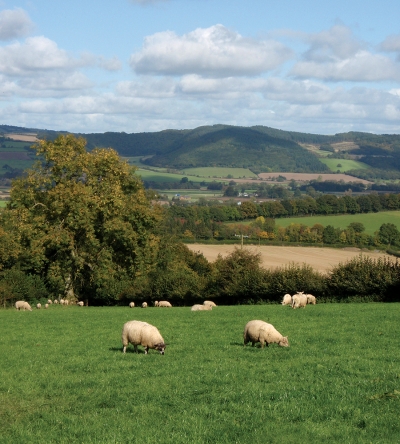 To the left of the church is all that remains of Titley Priory. Only the south-west angle and short stretches of the west and south sides of a ditch with a low bank on either side survive. This earthwork appears to represent the priory precinct boundary for a small monastic cell of the Order of Tiron, which was founded in 1120-1 and granted to Winchester College. It was dissolved in 1391 and the church, which was originally the priory chapel, was entirely re-built in 1868.

There are some fantastic views on this walk - at the top of the hill between 2 and 3 you can look north to the hidden valley created by Hindwell Brook, a major tributary of the River Lugg. South you can look down in to the river valley created by the Arrow. Northeast, you look across to the important Iron Age fort on Wapley Hill. These hill forts were probably less about defence and more about providing a tribal centre where the wider Iron Age communities could gather and shelter. A place to come to, to talk, trade, share stories and pass on ideas and good practice amongst each other.

There is evidence of an Iron Age farmstead with an enclosing bank and ditch on the hill slope near to the modern day Green Lane Farm. Again this is further evidence that this area formed part of a wider, well-developed Iron Age community.

Although not recorded the green lane between Green Lane Farm and Burnt House has probably been in existence for several thousand years as today’s footpaths link up to produce a ridge-top route from Wales into the English Marches. The Mortimer Trail now follows some of this route, that might have linked the ancient settlements at Hergest Ridge, Wapley, Croft Ambrey and beyond.