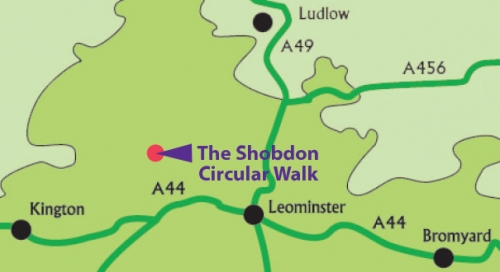 These features and the terrain are shown on the Shobdon circular route map.

There is parking at Shobdon Arches Visitor Centre.

Refreshments can be obtained from local pub, garage and village shops/Post Office in Shobdon. Please check opening times and booking requirements before setting out. 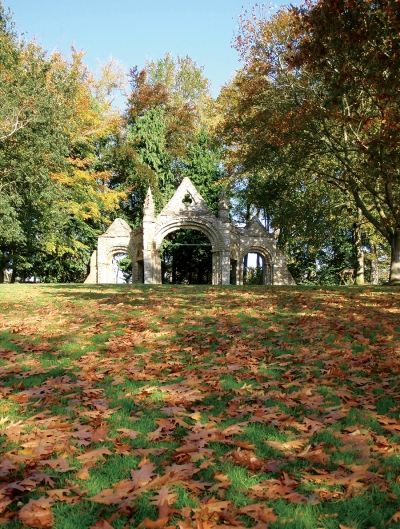 The outside of St. John’s Church and its parkland setting hide an extravagant Georgian “Strawberry Hill” Gothic-style interior. Everything except the 13th century tower was built in 1753-6 to the design of Horace Walpole.

The interior is a visual feast of Wedgwood blue and white with stucco panelling and gothic furnishings and is perhaps the finest example of its kind in the Country.

The original Norman church was dismantled to make way for this Georgian creation under instructions from the new lords of the manor, the Bateman family. Parts of the old church were carefully moved up the hill to create the Shobdon Arches.

The Shobdon Arches were removed from the Norman church at Shobdon in 1751-2 and carefully re-erected in full view on top of the slope to the north of Shobdon Court as a folly.  Despite having been moved, the Arches are still an important example of mid 12th century sculpture in the Romanesque style. For many years there have been schemes put forward to remove the arches and house them somewhere more sheltered and secure. However the recent growth in interest and appreciation of the historic landscape has meant that the Arches have now been recognised as an important example of an 18th century folly within a parkland setting of high landscape value.

Shobdon Hill has been at the centre of the local timber industry for many years. The mixed woodland provided timber for many uses. There are indications of past coppicing, hardwoods for furniture and building and larch that was used for sailing boat masts. At its peak there was an aerial ropeway from Shobdon Wood to the sawmills at Kingsland carrying timber for processing.

This ropeway was in use until the 1930s when alternative transport became more accessible.