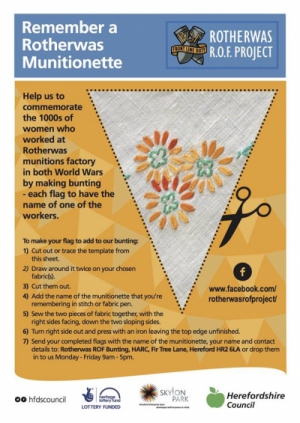 We held a community project during 2017, to make bunting - with each flag bearing the name of one of the munitionettes. This was part of a Heritage Lottery funded project to remember the women who worked at Rotherwas Munitions Factory,

Flags made in memory of women who worked at the factory were accepted from family members and community groups throughout the course of the project.

The bunting was used as part of the exhibition in November 2016 to mark the centenary of the factory producing its first shell. It is now housed at HARC as a memorial to the women workers.