Heart-stopping rides, side-shows, food stalls and ancient ceremonies are all part of the street extravaganza which is Hereford's May Fair. The fair has been taking place for over 900 years.

A ceremonial proclamation of the historic St Ethelbert's May Fair (May Fair) officially opens the fair, offering 12-and-a-half bushels of wheat by the Mayor to the Lord Bishop as payment for allowing the fair to proceed.

The Hereford May Fair takes place on the first Tuesday to Thursday following the first Monday in May.

These are the times between which attractions are allowed to operate. Not all rides will necessarily be open at all times. 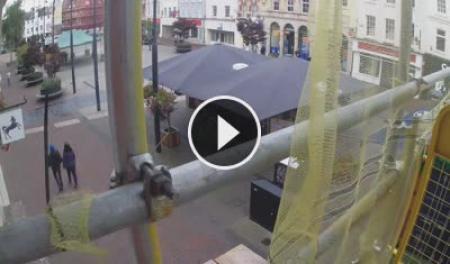 Leominster May Fair is a smaller traditional fair held in selected town centre streets each April or May.

The Leominster May Fair takes place on the Thursday to the Saturday before the first Monday in May.

Road closures for Leominster May Fair

Corn Street, Victoria Street and Broad Street in Leominster will be closed from 6pm on Wednesday 26 April until 8am on Sunday 30 April 2023.

Road closures for Hereford May Fair

To ensure the smooth running of the festival, some of the city streets will be closed during the period of the fair.

The roads closed to traffic are:

Some parking, loading and unloading areas will also be closed in Union Street and in the streets mentioned above.

In addition, Widemarsh Street (from its junction with Blueschool/Newmarket Street) and High Street will be closed to traffic from 4:30 pm to 11pm. This will make High Street a safer pedestrian area for fair goers.

All of these streets will be accessible to emergency vehicles.

Advance warning signs will be on all routes leading towards the city centre advising of the closures.

Diversion routes will not be signposted as, with so many possible permutations, such signing would be too confusing for motorists, especially visitors to the city.

All of the other city centre roads will operate as near normal as possible.

There may also be additional congestion for traffic using St Martins Street for access onto the A49 during the period of the fair.

Herefordshire Council urges drivers to be patient and considerate on the roads during the period of the fair.

Hereford's May Fair celebrates the 900th anniversary of the granting of its charter.

Find out about the Fair's history