Household waste collected from black bins in Herefordshire is taken to EnviRecover, a state of the art energy from waste facility where it is used as a fuel to generate electricity.

The facility started taking waste from households in both Herefordshire and Worcestershire in October 2016 and was officially opened by the HRH Duke of Gloucester on 14 June 2017. 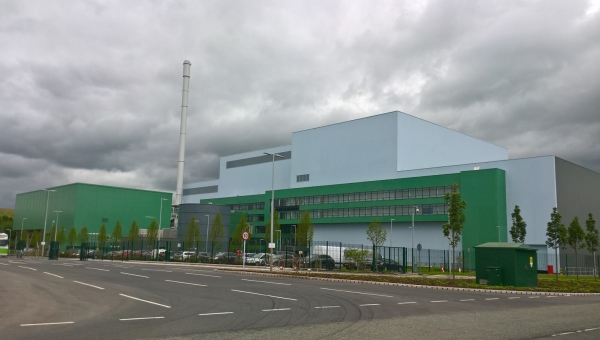 EnviRecover can accept up to 200,000 tonnes per year waste which it converts into in excess of 15.5 megawatts (per hour) of electrical power. It works by burning waste at over 800ºC and using the heat to produce steam to drive a turbine that generates electrical power, enough to power all the homes in Hereford.

The facility is operated by our contractor Severn Waste Services who provide a joint waste treatment and recycling service to both Herefordshire Council and Worcestershire County Council.

The facility was designed and built by Swiss firm Hitachi Zosen Inova (HZI) who have built a number of similar facilities in the UK. Agreement between the councils and their contractor was reach in May 2014, construction of the facility commenced shortly after and was completed on time and to budget.

Completion of EnviRecover means we no longer have to rely on unsustainable landfill to dispose of non-recyclable waste and have a reliable, safe and cost effective means of dealing with our waste for a long time to come.

You can find out more about EnviRecover on our contractors website www.severnwaste.com/recovery