Two family members have been fined for illegally disposing of waste in a case taken to Hereford Magistrates’ Court by Herefordshire Council’s Community Protection Team.

Mr Taylor George Skidmore (36) of The Willows, Madley was sentenced on Wednesday 17 April 2019 after pleading guilty to three charges of fly tipping, for not being a licenced waste carrier and for failing in his duty of care to transfer waste legally to an authorised person. He was sentenced to a 12 month community order, five rehabilitation days, 80 hours of unpaid work and ordered to pay costs of £561.64 plus a £15 victim surcharge.

Mr Skidmore’s mother, Mrs Lita Susan Skidmore (64), also of The Willows, Madley pleaded guilty to two charges of fly tipping and failing in her duty of care to transfer waste legally to an authorised person. She was sentenced to a 12 month community order, five rehabilitation days, 40 hours of unpaid work and ordered to pay £561.64 in costs plus a £15 victim surcharge. 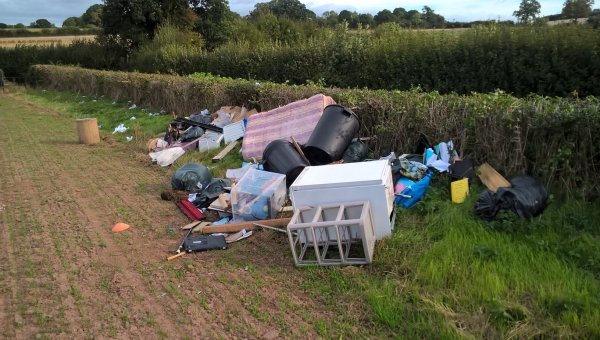 At the hearing on Tuesday 2 April, the court heard that Mr Skidmore was paid £80 to remove a van full of waste from a Hereford home in September 2018. A Clehonger landowner subsequently found the waste fly tipped in a field three days later.

Further investigations revealed that Taylor Skidmore had transported the waste without a waste carriers licence, that he did not have any duty of care records to show where the waste was collected from and taken to for the previous two years, and that he had taken collected waste home where his mother Lita Skidmore would dispose of the waste by burning on her land.