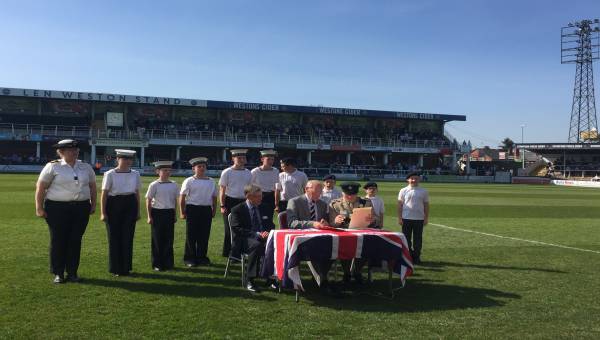 Together with a partnership of public, private and voluntary sector organisations and military charities, Herefordshire Council works with the armed forces to help and support current and former service personnel and their families. Through the Armed Forces Covenant, the council encourages Herefordshire businesses, community groups and individuals to pledge their commitment and support to armed forces personnel and their families, as well as reservists and veterans.

A moving ceremony took place at half time during Hereford FC’s penultimate home match of the season against AFC Telford. An Army bugle sounded the call to mark the signing of the Covenant while the Hereford Sea Cadets and Ross & Monmouth Sea Cadets formed a guard of honour on the Edgar Street pitch.

The pledges were signed by Hereford FC Community Director Andrew Graham and by County Colonel of The Rifles, Colonel Andy Taylor.

The Chairman of Herefordshire Council said:

“Herefordshire Council would like to warmly welcome Hereford FC to the ‘Covenant family’. Their pledge demonstrates that Hereford FC is committed to supporting service personnel and their families and treating them with fairness and respect.”

"The principles that underscore the Armed Forces Covenant are recognised and fully supported by Hereford FC. Many people have heard about the Covenant but may not know just how much great work goes on to support those men and women who are still serving - as well as our reservists, and the many who have retired or had to leave the service with life changing injuries. As Chairman of Hereford FC I am very pleased that, as Director, Andrew Graham continues his work to build our credentials as a community football club and that we have established this very important link with our armed forces.”