A popular member of the team at Much Birch CE Primary School has said a fond farewell to staff and pupils as she finally begins her retirement.

Shirley Jones has worked as a Herefordshire Council employee in schools for nearly 50 years.

She previously worked at Much Dewchurch School for 7 years, before moving on to Much Birch CE Primary, where she clocked up a further 42 years’ service in a variety of roles, during which she looked after up to three generations of some local families.

The 82-year-old grandmother said her final goodbyes to the school in a special Easter assembly held on Friday 12 April, where she was presented with a bouquet of flowers and gifts by the Head Teacher, Bernie Davies. 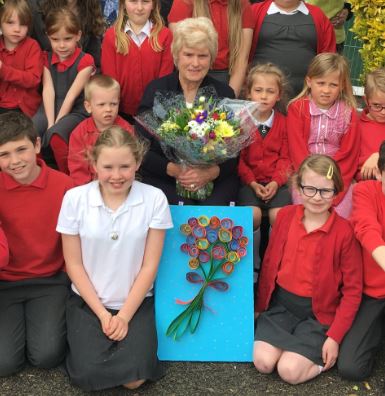 Head teacher, Mrs Bernie Davies said: “Shirley has been an important part of Much Birch Primary for so long and has made a huge impact on the school and the local community, having looked after children, their parents and their grandparents for nearly 5 decades.

“She’s a wonderful character, with a great sense of humour.  She is going to be greatly missed by the staff, pupils and their parents.

“I would like to thank her for all of her hard work and her commitment to the school and wish her well for her retirement.”

Chris Baird, Herefordshire Council's Director for Children and Families added: “Nearly 50 years of dedication and service is a remarkable achievement.

“On behalf of Herefordshire Council I would like to thank Mrs Jones for everything she has done for the staff and pupils of Much Birch Primary.  We wish her all the best for the future.”