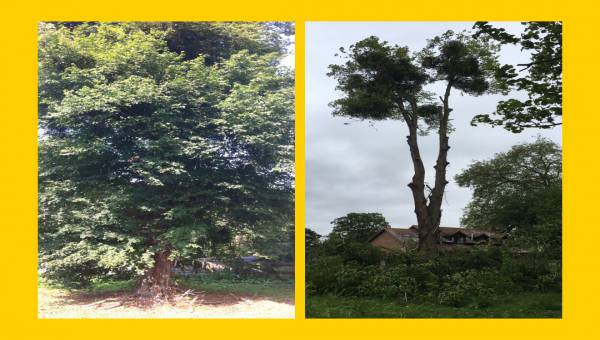 Lime tree - before and after action was taken

Herefordshire Council has won a prosecution case against a man found guilty of undertaking unauthorised works to a tree protected by a Tree Preservation Order (TPO).

On 4 February 2019, in a case taken to Hereford Magistrates Court by Herefordshire Council’s Conservation team, Roy Albert John Harrison (78) of Three Penny Bit Cottage, Lugwardine, pleaded not guilty to consenting to unauthorised works to a tree protected by a Tree Preservation Order. The court found Mr Harrison guilty and ordered him to pay costs of £5,000, a fine of £180 and a victim surcharge of £30.

It was put to the court that Harrison attempted to get a protected lime tree on his land cut down for financial gain, in order to clear the site for housing development. Previous planning applications for housing on the site, separate applications to fell the protected tree and subsequent appeals were turned down.

It was stated in court that on 14 May 2017, Harrison employed a tree surgeon to cut down the tree, under the belief that the TPO was invalid. The works were stopped part-way through. Although the lime tree will likely reform its canopy over time, it is believed the unauthorised works may have weakened the tree.

The tree surgeon was initially interviewed under caution, but no further action was taken.

“Herefordshire Council is committed to protecting the quality of the natural environment for the public benefit and to ensure that planning decisions are not circumvented. When undertaking works to a protected tree, responsibility lies with the person commissioning the work and the contractor. Penalties for felling protected trees can be severe; a person convicted may be liable to an unlimited fine which take into account any financial benefit which may result from the offence. We hope this case will act as a deterrent to anyone who may be considering carrying out unauthorised works to protected trees.”