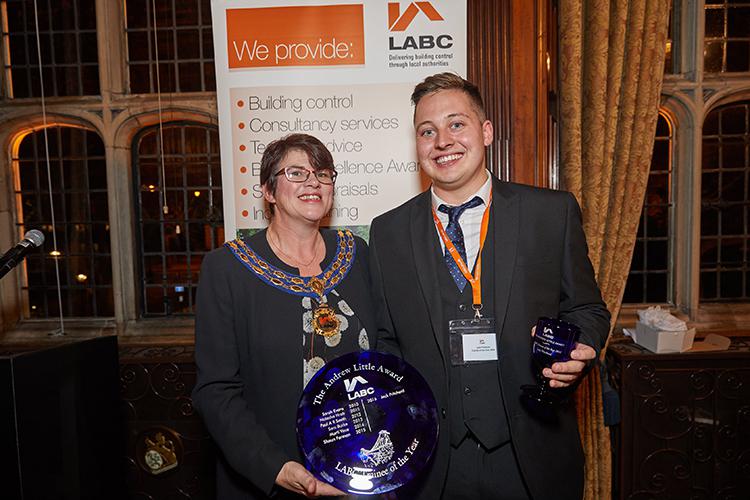 The LABC Trainee of the Year award is presented each year to a trainee who best exemplifies achievement and a commitment to public sector building control and a public service ethos.

Jack started in Building Control in 2014 with no experience in the field. During his tenure as trainee he has developed into a complete and model professional. His enthusiasm has driven him to excel in the role to a very high standard and he has demonstrated in various different capacities that he can cope with the role of being a building control surveyor.

Unknowingly Jack was nominated by his managers, and was over the moon receiving the award at the 2016 Presidents Reception in London.

"It felt good to be recognised by my team for all the hard work over the last four years and I'm privileged to be awarded this title.

When I had finished my 'A Levels' I was unsure of what I should do in terms of career. I felt that university wasn't right for me and I was unsure what the best career path would be. I then came across an opportunity at Herefordshire Council to become a Trainee Building Control Surveyor, looked at what the prospects were and felt this was the career choice for me.

Getting LABC bursary funding in 2014 allowed me to undertake a HNC in construction. This two-year course really allowed me to incorporate the practical work I was completing on site with all of the text book knowledge that I was learning whilst undertaking this course.

Along with the HNC, LABC also put on a two week 'boot camp' programme which I was invited to attend. The course consisted of workshops and talks from various established professionals within the construction industry. I have made a network of fellow trainee surveyors who I keep in contact with to this day.

The role of surveyor is extremely challenging as no two days are the same and it has taught me to become more responsible and professional in my day to day work life. The support that LABC and my team have given me since I started can be seen throughout my work and it is a great privilege that I have been awarded Trainee of the Year. And it's very pleasing to see that all the hard work I've put in has paid off."

Jack's team were delighted with the news, and glad that his hard work and great attitude have been recognised with such a prestigious award.