Herefordshire Council and Hereford Cathedral are pleased to unveil Poppies: Weeping Window by artist Paul Cummins and designer Tom Piper, as part of the 14-18 NOW tour 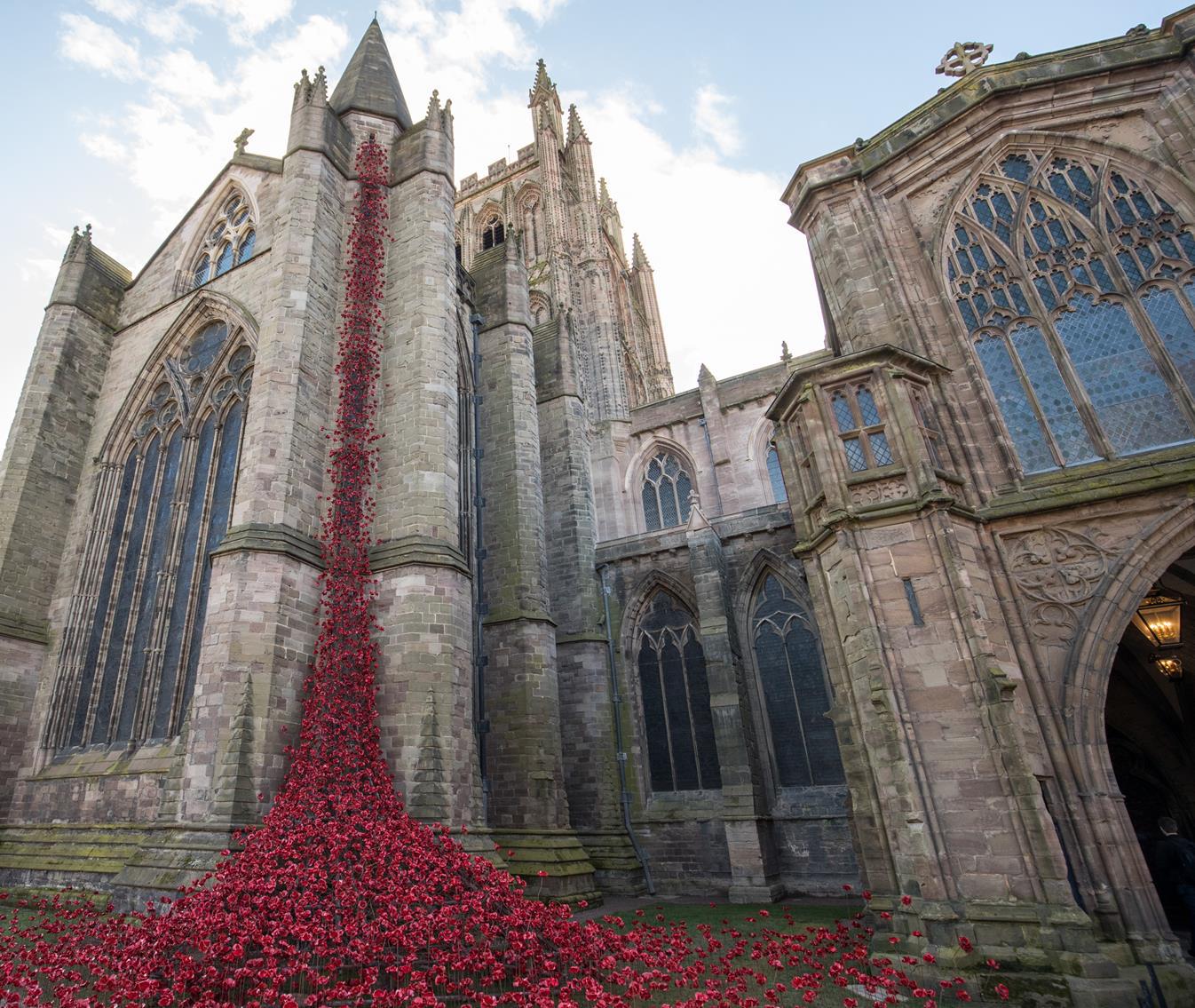 The iconic poppy sculpture Weeping Window by artist Paul Cummins and designer Tom Piper will open tomorrow, Wednesday 14 March, at Hereford Cathedral.  The work will be on site until 29 April 2018 as part of the final year of 14-18 NOW’s UK-wide tour of the poppies.

The presentations by 14-18 NOW, the UK’s arts programme for the First World War centenary, give people across the UK the chance to experience the impact of the ceramic poppy sculptures in a range of places of particular First World War resonance.  The sculptures have already been displayed in 13 locations since the tour started in 2015, and viewed by over 3.5 million people to date.  At the end of the tour they will become part of the Imperial War Museums’ collection.

The men and women of Herefordshire made a huge contribution to the war effort, from the brave young men recruited into the Herefordshire Regiment - among them Allan Leonard Lewis who was awarded the Victoria Cross - to the Canary Girls who filled munition shells at the Rotherwas Munitions Factory.  Local farmers provided food for the country and the Front, as well as horses for the movement of soldiers and supplies. 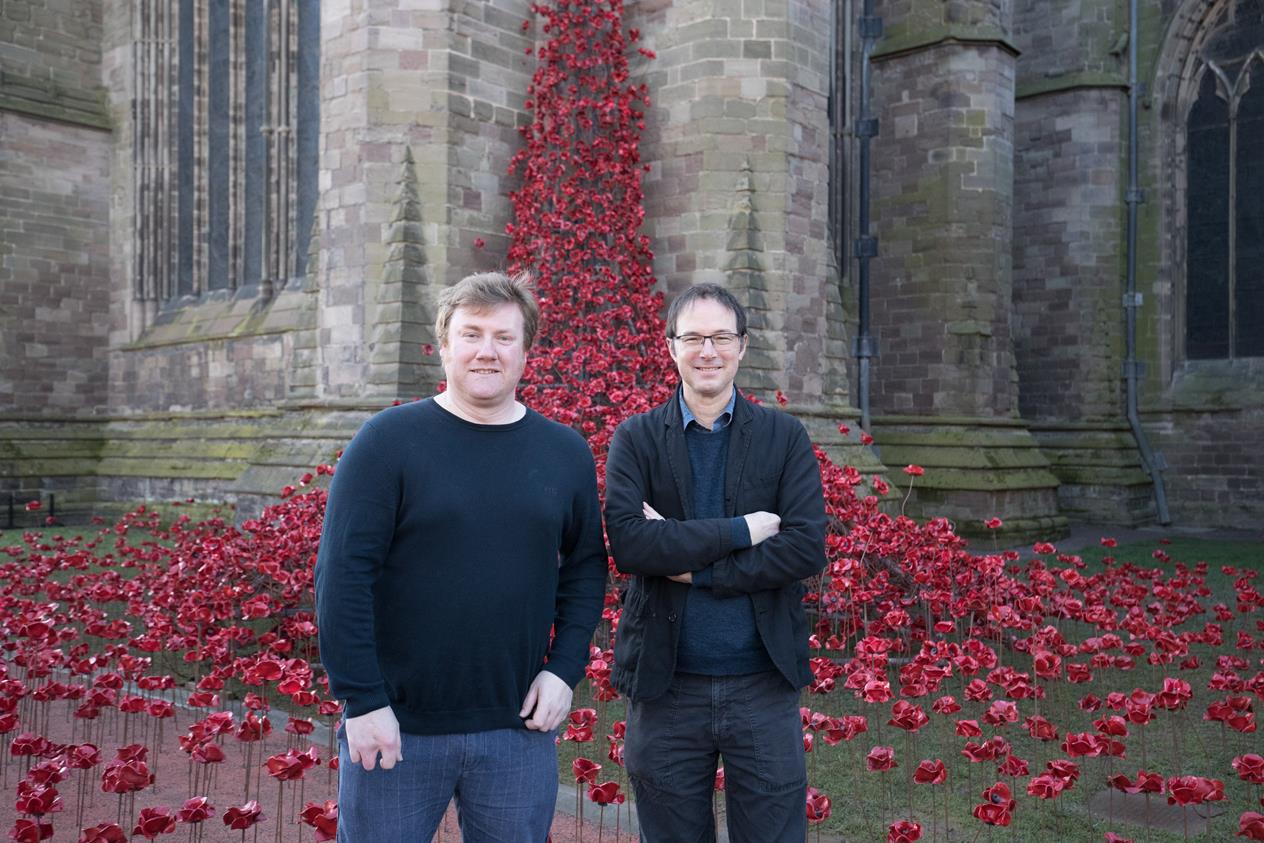 “We are delighted to work with Hereford Cathedral to welcome the iconic poppy sculpture, Weeping Window to Herefordshire.  We are expecting up to 2,000 visitors a day to come and see the artwork over the next few weeks, explore the cathedral and the city.  As a proud military county, it is an honour to be able to mark the sacrifices made by those during the First World War.”

The Dean of Hereford said:

“It is an enormous privilege for us at Hereford Cathedral to be the first venue in this final year of the 14-18 NOW tour to host Poppies: Weeping Window.  As expected, it looks stunning, with the poppies cascading down the staircase turret of our north transept.  We know Weeping Window will be a poignant and inspiring focus for prayer and reflection over the next seven weeks for many people from across our city and county and far beyond.  We are immensely grateful to all those who have helped to bring this very special work of art to Hereford.  We look forward to welcoming the visitors who will come to see it.”

“The poppies have captivated millions of people across the UK, and we are delighted to present Weeping Window at Hereford Cathedral as part of the ongoing tour.  We are so grateful to artist Paul Cummins and designer Tom Piper for these two enormously powerful artworks of national significance that continue to inspire all who see them.”

Weeping Window is from the installation ‘Blood Swept Lands and Seas of Red’ – poppies and original concept by artist Paul Cummins and installation designed by Tom Piper – by Paul Cummins Ceramics Limited in conjunction with Historic Royal Palaces.  The installation was originally at HM Tower of London from August to November 2014, where 888,246 poppies were displayed, one for every British or Colonial life lost at the Front during the First World War.  Together, the sculptures Weeping Window and Wave are made of over 11,000 poppies.

The tour has been made possible by the Department for Digital, Culture, Media and Sport (DCMS), the Backstage Trust, the Clore Duffield Foundation and the National Lottery.  DAF Trucks are the transport sponsor for the UK presentations, and 14-18 NOW is delighted to partner with DAF on making this historic project a reality.  The learning and engagement programme for the poppies tour is supported by the Foyle Foundation.  Storage of the sculptures is generously provided by MTEC.