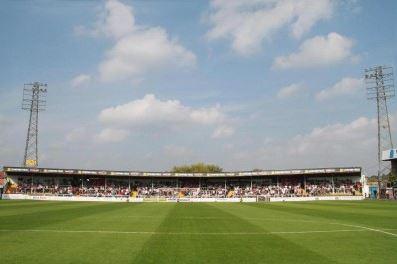 Herefordshire Council and Hereford Football Club met this week to continue negotiations towards an extended lease term. It is hoped that the extended lease will be in place before Christmas and will assure Hereford FC's tenancy for a minimum of 10 years from the commencement date.

Herefordshire Council recognised the outstanding work Hereford FC has done to refurbish and maintain the Edgar Street stadium and understood that without a significantly extended lease, Hereford FC would be unable to progress other improvement projects for the benefit of supporters.

The development of the stadium and the surrounding area were also discussed, as the council improves the region around the new City Link Road, which will help reduce traffic on Commercial Road, Widemarsh Street and Blueschool Street and improve air quality in the city centre. There is also an opportunity for the redevelopment of the Blackfriars Terrace end, as part of the proposed 'Urban Village' project which will back on to the Edgar Street Stadium. This would mean a new spectator stand and facilities, alongside other retail outlets, and would see the stadium being returned to four sides.

"It has been an exciting year for Hereford FC and we are pleased to be working together to negotiate an extended lease before Christmas, to help assure the club's future. The Old Market complex successfully changed the face of Edgar Street and as part of Hereford 2020, the City Link Road and Urban Village will offer further improvements to the area."

"It's welcome news that the club should be able to secure a long-term lease before Christmas. We have been working closely with the council to ensure the future of the club and the improvements to the city centre will add to the fan experience. The return to a four sided stadium will enable the football clubs ambitions - a return to the Football League - to be realised."