Hereford Football Club has signed an agreement with Herefordshire Council (dated 19 December 2017), which will secure the club’s tenancy at the Edgar Street stadium for a further 10 years.

The extended lease - which can be triggered by the club - will allow for future development of the club’s stadium as part of a wider area that is set to further improve following the opening of the Old Market shopping development and the construction of the new City Link Road. The proposed ‘Urban Village’ project, part of the Hereford 2020 Edgar Street regeneration, could potentially mean a new stand and associated facilities to return the ground to a four-sided stadium, as well as more retail outlets nearby. 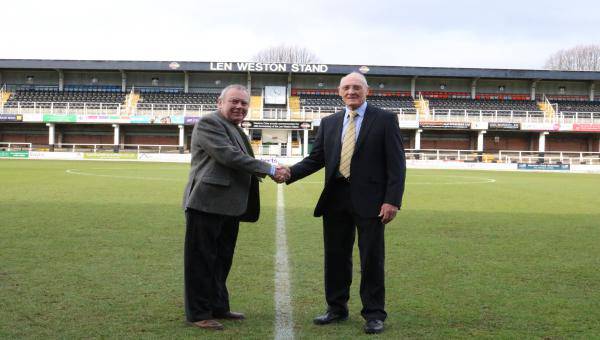 “It is quite apparent that the council recognises the work of the many local people who volunteer at the club and also the financial investment in stadium renovation since April 2015. A longer lease term will justify further investment in improvements to the club’s facilities, allow time for a return on the investment and ensure we are eligible to apply for grant funding that may be available for future projects.”

“Following the league success of Hereford FC, and to enable them to plan, invest and satisfy the requirements of the Football Association, Herefordshire Council will grant the club a 10 year lease extension, which they can take up at any time before July 2020.

“Hereford FC continues to make a great contribution to the city and the wider community. Many local traders benefit from increased trade on match days and the football club is an important employer and a contributor to the local economy.”