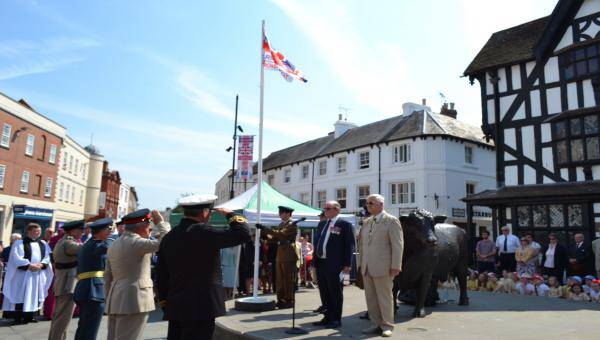 It will be the highlight of an event packed day celebrating Armed Forces week from 10 am to 3pm on Saturday.

The pilot is local man Andy Preece, who attended Aylestone School. Andy will be doing the flypast at approx. 13:50. He will do three passes over the city centre initially approaching from the south west i.e. over the Cathedral and depart to the East.

There will be military vehicles and stalls in high town along with performances throughout the day by the Band and Bugles of The Rifles, performances by the Starlight Dance Company and many other events taking place throughout the day at the Shire Hall, including military support groups and refreshments provided by the Base Camp project, a fantastic day out for all the family.

"Herefordshire Council will be showing their continued support for all sections of the British Armed Forces, their families and veterans: all of whom are giving and have given tremendous service to the country."

"In this year's Armed Forces day celebrations, we are privileged to have a flypast by a Second World War Spitfire.

There will also be performances by the Band and Bugles of The Rifles, along with several other events taking place in the city centre and at Shire Hall, culminating in a free concert featuring Marches Military Wives Choir, Stretton Sugwas Primary School and Hereford Academy bands and the Shire boys."

The free concert will start at 7pm in the Shire Hall and is open to everyone, no ticket is required.

For more detail on what is happening on Armed forces day in Hereford please visit www.facebook.com/HerefordshireAFD

Armed Forces Day aims to raise public awareness of the contribution made to our country by those who serve and have served in Her Majesty's Armed Forces, and give everyone an opportunity to show their support for the men and women who make up the Armed Forces community - from currently serving troops to Service families and from veterans to cadets.