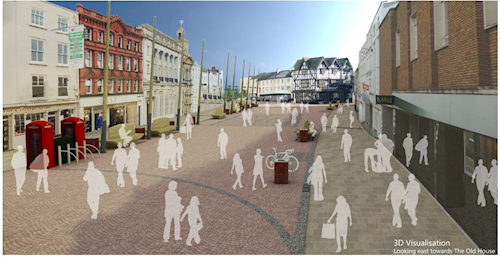 The public consultation which asks for opinions on plans to improve the city centre has been extended until 29 January 2016.

Although the number of consultation responses has been good to date, with around 450 people completing the consultation questionnaire, the council is keen to ensure that it gives ample opportunity for visitors, residents and shoppers to give their views.

"I am pleased with the response we've received so far and it's encouraging that residents are taking an interest in this project.

Plans of the proposed improvements can be viewed on the council's website https://www.herefordshire.gov.uk/transport-and-highways/transport-schemes/high-town-refurbishment

Plans can also be viewed at the Butter Market and paper surveys completed.

If you have any questions about the consultation or would like to request a paper survey please email Hightown.herefordshire@bblivingplaces.com