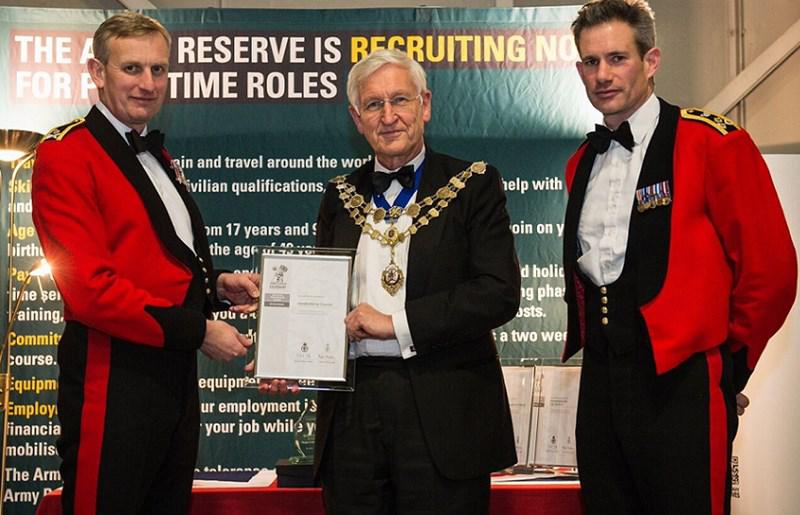 Herefordshire Council has been presented with the silver award under the Defence Employer Recognition Scheme (ERS) which encourages employers to support defence families and inspire others to do the same.

Councillor Brian Wilcox, the chairman of Herefordshire Council collected the award on Thursday evening at a special dinner held in the Cold War Museum, RAF Cosford.

A citation was read before Major General Richard Stanford, MBE presented the award, which acknowledged that Herefordshire Council is a key provider of employment, services and facilities to the local community.  Also that since signing the Covenant Scheme on 14 November 2014 Herefordshire Council has taken the spirit and doctrine of this seriously, and have supported many initiatives within the County.

"Herefordshire Council is honoured to receive a silver award under the Ministry of Defence Employer Recognition Scheme.  We are proud to be an armed forces friendly organisation, offering support to the armed service family in our community, to our employees who are in the reserve forces and adopting a flexible approach to leave for our service spouses and partners."

In May 2012 the Herefordshire council signed the Herefordshire Armed Forces Community Covenant and since then has been working with partners to: support the armed forces community; help integrate the armed forces community into local life; recognise and remember the sacrifices made by them; and address issues faced by serving and ex service personnel and their families.

In November 2014 Herefordshire Council signed up to the Armed Forces Corporate Covenant, pledging a number of actions to support the armed forces community and recognising the value serving personnel, reservists, veterans and their families bring to the council's business.

The ERS is designed primarily to recognise private sector support although public sector organisations such as the emergency services, local authorities, NHS trusts and executive agencies are also eligible to be recognised.