May Fair grand opening 3 May 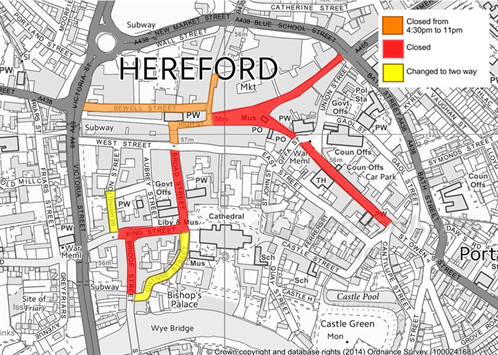 Heart-stopping rides, side-shows, food stalls and ancient ceremonies are all part of the street extravaganza which is Hereford's May Fair.

The streets come alive during the three-day festival each year as thousands flock into the city centre, some from other counties, to enjoy the festival atmosphere and myriad of entertainment.

Up to 200 showmen and women from around the country will make their way to Hereford to prepare for the 3 May grand opening.

Abie Danter, Chairman of the South Wales and Northern Ireland Section of The Showman's Guild, said:

"Once again we are proud to present Hereford's annual May Fair arriving Bank Holiday Monday 2 May when we start setting up from 6pm".

"A warm welcome awaits when you join us at this historic and impressive traditional fun fair. Showmen from all over the UK will provide excitement, fun and laughter from riding the heart-stopping white knuckle rides to bumper to bumper fun, not forgetting the thrills of the children and traditional rides. From rides to stalls we have it all, including some new attractions for 2016!"

The Opening Ceremony is at 3.45pm on the Tuesday May 3 at Cathedral Close.  A ceremonial offering of 12-and-a-half bushels of wheat is made by the Mayor to the Bishop of Hereford as payment for allowing the fair to proceed. This year's ceremony will once again see the ringing of the fair bells. Commissioned by the national President and local Chairman of the Showman's Guild, the bells will now be rung to signify the opening of each Guild fair in the division.