The Birmingham 2022 Queen’s Baton Relay is confirmed to visit Herefordshire during its final journey through England this summer, as the full route is revealed.

On Tuesday 5 July, Herefordshire will officially welcome the Baton.

The Queen’s Baton Relay will begin at Hereford Cathedral at 2.45pm, and will embark on an hour-long tour, arriving back at the Cathedral at 3.45pm. The route will include Bridge Street, Castle Street, Castle Green and Bishop’s Meadow and will cross the River Wye at Victoria Bridge and the Old Bridge 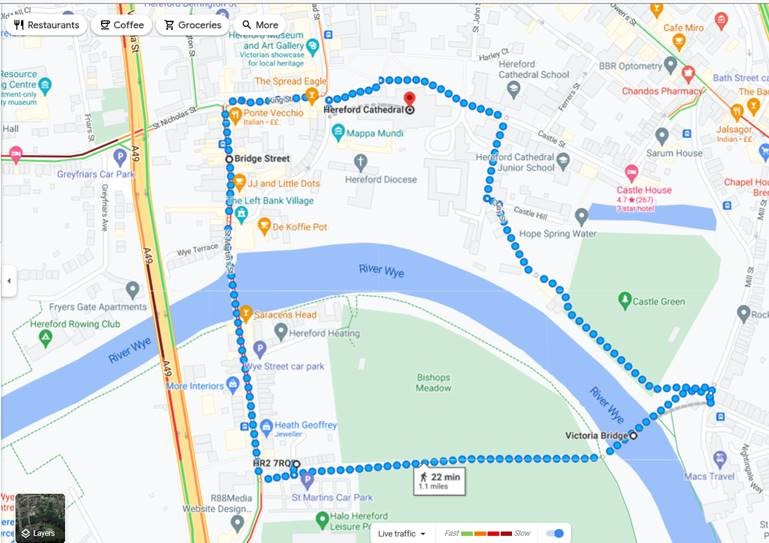 Proposed route of The Queen's Baton through Hereford

Members of the public are encouraged to get involved with the celebrations and embrace the arrival of the Baton, taking the opportunity to experience the buzz of Birmingham 2022 in their community.

Thousands of Batonbearers, each with inspiring backgrounds and stories, will have the honour of carrying the Baton during the journey through England, including those nominated in recognition of their contributions to their local community, whether that be in sport, education, the arts, culture or charity.

One of the confirmed community Batonbearers in Herefordshire is Michael Chandler, a Hereford postman who, since the year 2000, has raised over £500,000 for cancer charities. Among his achievements, ‘Postman Mike’ has completed 19 London Marathons, 2 nationwide cycle rides on his Royal Mail bike, and run from Hereford to London pushing his Royal Mail delivery trolley.

Phil Batty, Director of Ceremonies, Culture & Queen's Baton Relay, said: “Whilst the Baton has been travelling across the Commonwealth, we have worked closely with Local Authorities in England to devise a route that engages with hundreds of communities, passing sport venues, historic sites, local schools and Areas of Outstanding Natural Beauty. Yet the Queen’s Baton Relay is far more than just a journey. It symbolises connecting people from every corner of the Commonwealth, celebrates Batonbearers who take on challenges, and marks the countdown the biggest sporting event in West Midlands history. And by the time the Baton returns to England for the final leg, 71 nations and territories will have already experienced the magic that comes with it.”

Commonwealth Games Federation President Dame Louise Martin DBE said: “The Queen’s Baton Relay symbolises hope, solidarity and collaboration across the Commonwealth at a time when it is needed most. It continues to inspire people wherever it goes and creates huge excitement for Birmingham 2022 as it journeys towards the Commonwealth Games Opening Ceremony on July 28.”

The Queen’s Baton for Birmingham 2022 was created in a West Midlands collaboration that fused art, technology and science. Made from copper, aluminium and steel, the Baton also features a platinum strand in homage to The Queen in her Platinum Jubilee year. It is also equipped with cutting-edge technology; 360-degree camera, heart rate monitor, atmospheric sensors and LED lighting.

For more information on the Queen’s Baton Relay, visit www.birmingham2022.com/qbr.