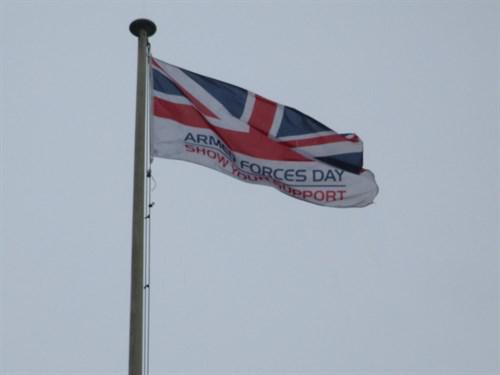 The Lord-Lieutenant, Lady Darnley, The Chairman of Herefordshire Council and senior figures from all three armed services were present at the ceremony at the Shirehall in Hereford on Monday, as well as Dr Mike Seeley, Colonel with the Royal Army Medical Corp/Army Medical Services representing the Wye Valley NHS Trust

As part of her speech Lady Darnley said

"This flag flies to mark our respect for all our armed forces, regulars and reservists, past and present, as well as members of the Royal British Legion, the Cadets and those that lead them. It demonstrates the high level of support that they all enjoy from their fellow citizens"

"We are here to demonstrate our respect for those who have served, or who are serving in the Royal Navy, the Army and the Royal Air Force; we celebrate their achievements and contributions."

"These men and women, many from our county, risk their lives for our freedom and for the freedom of many others across the world; we honour their service and we remember their sacrifice; and we do not forget their families who have to watch and wait, nor those who mourn their loved ones who have paid the ultimate sacrifice."

As part of his speech Councillor Brian Wilcox, Chairman of Herefordshire Council said

"This is an excellent opportunity for us publicly to show our support for all the men and women who are serving on our behalf in a world with so many trouble spots and areas of conflict which threaten world peace. We owe a debt of gratitude to all those in the armed services wherever they may be, for risking their lives for their country and in the cause of peace. We are here to demonstrate our appreciation to the members of the wider Armed Forces community including service families, veterans and cadets"

"The team at Ledbury has done an incredible amount of work to organise this year's events and I would like to thank everyone who has been involved. We hope residents across the county will go to Ledbury and enjoy the fantastic events taking place, whilst also showing their support for our armed forces personnel based around the world"

Today's armed forces are planned to be represented in a parade by The Guard and Colours of HMS LEDBURY and detachments from the county's Sea, Army and Air Cadets, accompanied by the Band of the West Midlands Fire Service and the Royal British Legion County Rally.   Soldiers of yesteryear will be recalled by several living history groups including a working replica WW1 tank.  The band will entertain the public along with local choral and brass ensembles. The parade will take place from 2.30 until 3.30 p.m. A booklet describing the battles of Jutland and the Somme will be available free on the day

In the evening there will be a ticketed commemoration concert in Ledbury Church, performed by renowned organ and trumpet soloists Jennifer Bate and Crispian Steele-Perkins and featuring the local school choir.

The aim of Armed Forces Day is to raise public awareness of the contribution made to our country by those who serve and have served in Her Majesty's Armed Forces, and give everyone an opportunity to show their support for the men and women who make up the Armed Forces community - from currently serving troops to Service families and from veterans to cadets.