Our Shop Local card has been used all over Herefordshire to help our local and independent retailers, producers and traders after a particularly tough time during the Covid pandemic

We’ve spoken to local retailers about the scheme and how it’s helped them and made sure your money stays local – which is good for you, your community and the future of Herefordshire. 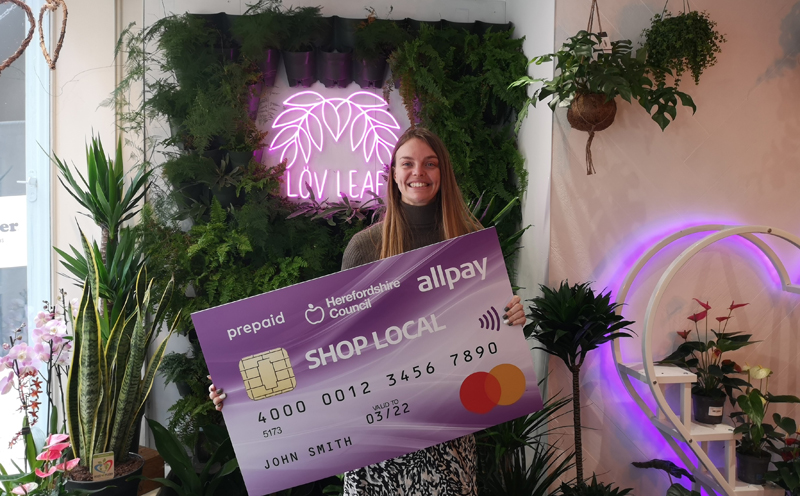 Opening a new business in the middle of a pandemic was always going to be risky – so the Shop Local scheme came at the right time for Steph Sparks.

Unhappy in a previous role during lockdown, Steph’s passion for plants prompted a business idea – a place where people could not only buy plants but learn how to look after them too.

Löv Leaf, based in Church Street, Hereford, opened in July 2021 and as well as selling plants, also offers workshop space for well-being and creative activities.Steph said:

“I think the pandemic has focused attention on well-being, mental health and I know that looking after plants, nurturing them, certainly helped me during the lockdown and that was the seed of the idea for the business.“It was brave I suppose and also a bit of a risk, but I must admit when the Shop Local email arrived I almost brushed it aside thinking surely Herefordshire Council aren't going to give everyone the initial £15 to spend!

But when people started coming into the shop and using it, I was just completely overwhelmed. I was so grateful – both to the council for supporting the business but to the people who chose to spend their money in my shop.”

As well as seeing an increase in the number of shoppers coming through the door, Steph said the pre-paid card was often used to support the purchase of more expensive items.

“I think a lot of people, especially people buying gifts around Christmas, who might have just usually spent maybe £20 to £30 on a gift were actually buying some of the bigger items, which I wasn't expecting.

“And then people who had never thought about buying a plant were using their card to do so because it’s almost like it was a gift to themselves – these are sales I might not have seen so the Shop Local scheme has been brilliant for Löv Leaf.”

Steph is encouraging anyone yet to activate the card to make sure they use it.

“I still get probably one person a day using the card but obviously it would be great to see lots more! But I’d just urge people to not just spend local but spend with independent traders too.

“Times are really tough at the moment so if there is a local independent business you can spend it with then all the better!” 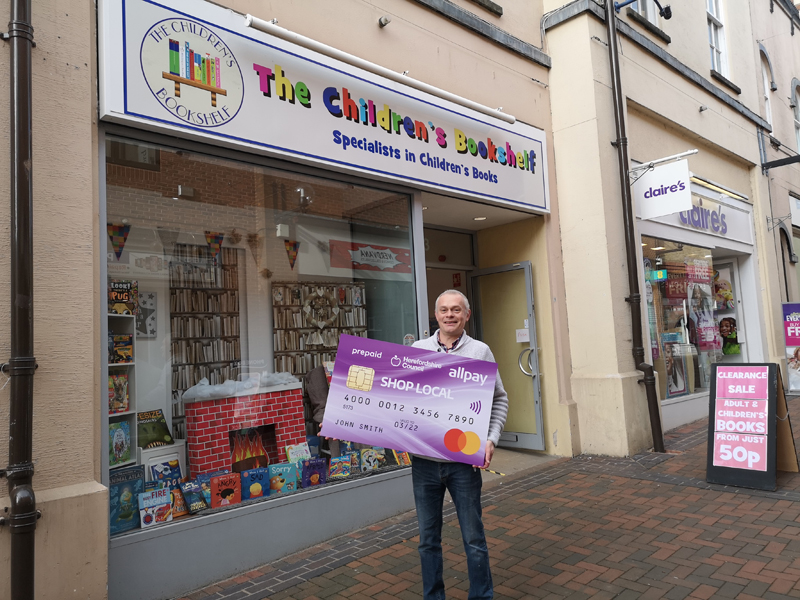 At one point during the pandemic, Herefordshire bookshop The Children’s Bookshelf had just £1 left in its business bank account.

“We are a small independent shop - for about four weeks during the start of the Covid crisis we did some online sales, mainly to support parents teaching at home, but really as a way to clear stock. But it just wasn’t sustainable,”

In December 2020, he was forced to shut the doors of the business he had originally set up because he wanted to make reading accessible and affordable for all families.

“A combination of the pandemic and competition from online retailers meant we just couldn't keep going - which was a shame because we have a real focus on mental health and wellbeing for children in the literature we sell, and of course, this was the time they needed it most.”

Fast forward 18 months and it’s a very different story. Now in a new shop in the Maylord Centre in Hereford, Duncan says thanks to the Herefordshire Council Shop Local scheme, the business is on the up.

“We felt honoured and privileged that so many people wanted to spend their Shop Local card with us and support us. It has really helped, it’s just been brilliant I think for the council to do what they've done.

“We opened the door in May last year and confidence wasn’t there initially, but people seem happier to be out and about and it’s great to see the Shop Local card being used so much in independent shops.

“Quite often we rely on passing trade and footfall, that's the foundation of all of it really, we have to have people through that door and that’s what the Shop Local scheme has done – it’s brought people in. We know if they come in, they’ll increase their spending habits with us and they’ve been spending the full amount on the pre-paid card which has been brilliant.”

But the Shop Local scheme has not just supported The Children’s Bookshelf, it’s helped the business take books into primary schools. Duncan says they subsidise the cost of new books, as part of his aim to make reading accessible for all.

“For every 10 books that we sell at a school, the school earns a Golden Ticket which is a £2 book voucher which they can either redeem themselves or they can give it to deserving children - they can come and spend it in our shop.

“We worked out we’ve given away just over 10,500 free books in the last seven years to schools, nursery, pre-schools, the hospice, children's ward and the local Scouts.” 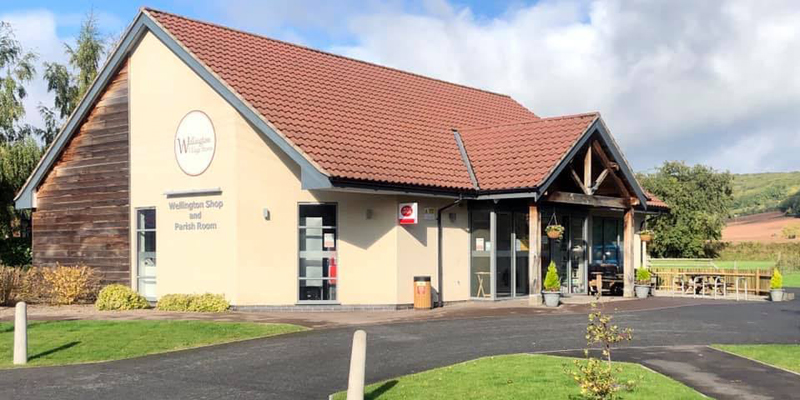 When Julia Ashton bought Wellington Village Stores in December 2019, she’d certainly not planned to spend the first two years trading through a pandemic.

Dubbed the ‘supermarket in the sticks’, the village shop has become the hub of the community, operating a Post Office as well as offering a wide range of everyday goods and fresh and frozen products.

“It’s been a bit of a rollercoaster two years. I bought the shop and then the village experienced a period of terrible flooding and then Covid hit. It wasn’t exactly how I’d imagined starting a business.

“Obviously, people were worried about going out and about so we started regular deliveries in the village and also had to invest to make sure the shop was a safe space for shoppers.

“There were also shortages of some goods, so we bought ahead and in bulk if need be so that our customers would be able to get items like bread and pasta.

“We made our own screens, created one-way systems and limited the number of people at any one time but we got through it. We really became the heart of the community and I think that’s why so many people have chosen to spend their Shop Local cards here with us.

“It’s just been wonderful, we feel so blessed - people were phoning up asking if we took the cards which Herefordshire Council had provided. We even printed out the number to register and put it on the wall so people could register to spend with us there and then if they’d not done so already.”

Julia says Wellington’s rural nature meant that the shop and the deliveries were a lifeline for many of the village’s elderly residents during the Covid crisis.

“I think it has brought the village closer together in some ways. We are a community and it’s great to see people coming back into the shop now they are feeling safer. We write on their receipt what they’ve spent off the card so they know how much they have left, and it’s fantastic they are coming back in to spend it with us.”

With some of the funds still to be spent, Julia has a message for shoppers in Herefordshire.

“Register your cards before the end of March deadline as having free cash available to spend to support local, independent shops is a great opportunity! It makes a massive difference to a small business when you choose to spend it with them. I’m just so grateful to Herefordshire Council for coming up with this scheme, it’s about more than a pre-paid card. It’s helping communities get back on their feet.” 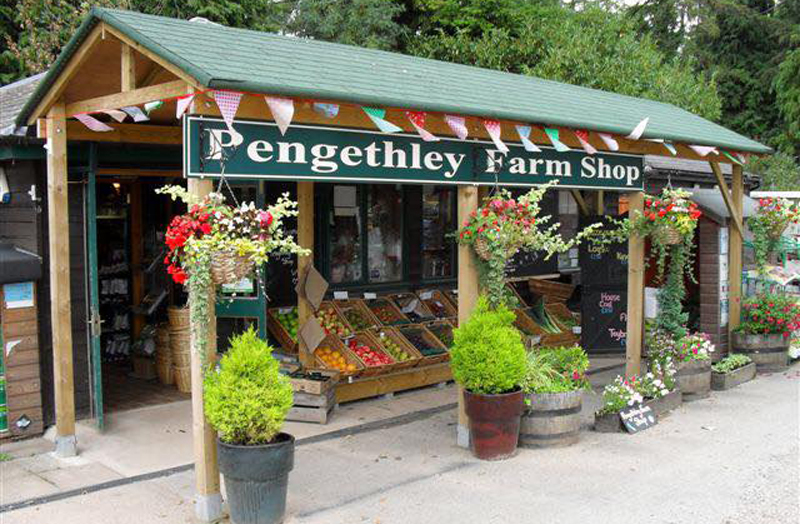 It’s not just individual businesses which have benefitted from Herefordshire Council’s Shop Local scheme. In Ross-on-Wye, it’s been an entire community, its supply chain and the environment too.

“When we’re selling produce which has come from two miles down the road, shopping local takes on a whole new meaning.”

The family-owned farm shop with its renowned butchery, fresh fruit and vegetables and extensive deli, remained open to support the local community throughout the pandemic.

Costly adaptations to make sure the shop was Covid-safe, with protective screens and a one way system in place, means the Shop Local pre-paid card has been a boost for business.

“It has been really easy for people to use, we’ve had lots of people calling us to ask if we take the card and it’s just simple to take the money off their total shop at the till.

“It’s great that the council has decided to do this but it’s brilliant that it can be spent in all kinds of shops and the smaller businesses really do benefit. Using their card here means the community are also supporting Herefordshire’s food and drink producers, bakers, farmers and suppliers.

“We sell fruit juice made just down the road using Herefordshire’s produce and we do a roaring trade in Two Farmers crisps, which is a growing Herefordshire business based just across the road from us.

“That’s low food miles – so shopping here is good for the environment too.”

The shop also delivers to the local community, with up to 50 deliveries a day during the height of the Covid crisis.

“Even now there are some people who are not comfortable with being in shops, even though our doors are always open so we have a good flow of air, so we are very happy to deliver.”

As well the local community and suppliers, the farm shop is also supporting the recovery of the local hospitality trade, hard-hit by the pandemic. Many of the local hotels, bars and restaurants buy direct from the shop’s butchery.

“Herefordshire Council probably don’t realise that this pre-paid card hasn’t just supported this shop, it’s supported the whole of the community, the people who live and shop here and other business, farmers and suppliers too.”